As Paul mentioned in his earlier post, last night was a great night for stargazing. When I saw how good the sky was earlier in the evening I had one thing in mind: To sketch NGC 752. As some of you know this is a large open cluster in the constellation of Andromeda. I've read reports over the past 24 hours that it is visible to the naked eye, but I needed my 9 X 50 finder scope to see it against the night sky.

Using a 2" 30mm Plossl there were several colourful stars at 40X. As one of these beautiful objects was 56 Andromedae I decided to not go to any higher with the magnification as it would mean I'd lose it in my FOV. This double star is very close to HIP9001. Both of these stars are striking as they are colourful and bright. For example, the former has an orange hue to it and is estimated to be a 5.68 magnitude star, while the latter estimated as a 5.87 magnitude star displays a more yellowish hue.

The sketch took approximately, 25 minutes to complete. I finished observing this beautiful cluster at 22:03IST.

Other details from the evening include:
Location: Back Garden, Dundrum Ireland - Bortle 8
Seeing: 5/7pk
Transparency: 3
Instrument used: f/5 250mm Newtonian Reflector
Eyepiece: 2" 30mm Plossl (70° AFOV)
Materials used: 2B pencil, A4 170gsm sketching paper. The image was sketched at the eyepiece, then scanned, and uploaded to my PC. I used to Gimp 2.1 to invert, colourize, and resize the image

Clear skies to all,
Darren. 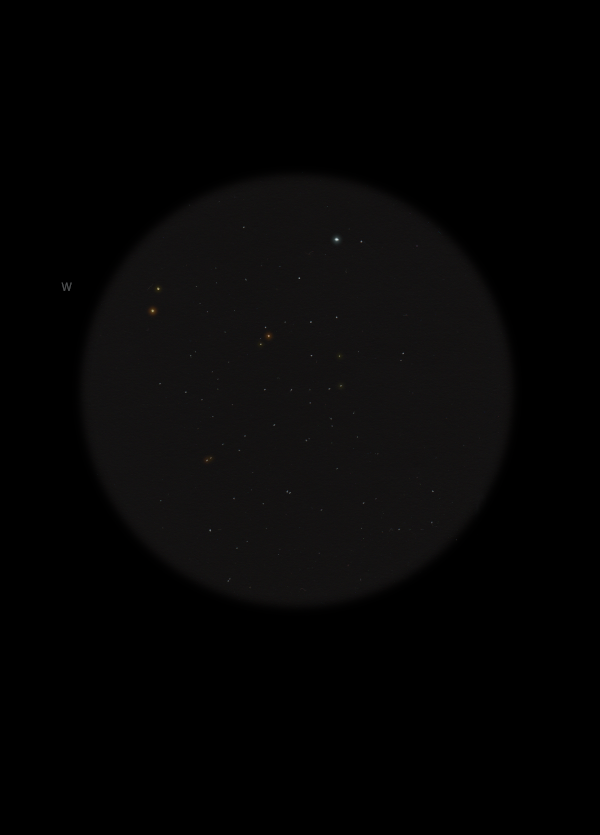 Less More
2 months 1 week ago #109425 by Until_then-Goodnight!
Replied by Until_then-Goodnight! on topic Sketch of NGC 752
Very many thanks Paul! I tried my best to match the colours of what I saw through the eyepiece using GIMP, but it's a a difficult task. Also after checking on Starry Night 7, I believe I've over estimated the magnitude of TYC2816-709-1  - the bright white star in the sketch - when colourizing it. All part of the learning curve I suppose!

Thanks again, and  I'll see you Friday hopefully!

Clear skies to you,