As predicted Tuesday night was a clear night, so I tried to make the most of it. Having set-up my f/5 250mm Newtonian Reflector on a Dobsonian base I went searching for NGC 129. During our last meet-up at Glencullen, Aubrey had mentioned how nice it is, and he suggested I should try and sketch this open cluster. Unfortunately I could not locate it, but I did stumble across a most striking double star. Based on the description in 'Turn Left at Orion' I believe the star I observed was Struve 3053, but please correct me if you feel I'm wrong. As you can see from my sketch the primary star is a rich orange colour. It seemed to be brighter at its core. The companion star, which Consolmagno and Davis (2018) state is 15" ENE from the primary, was a bluish white star at 42X. I decided to push the magnification to 50X. and the colours were striking. In a way it reminded me of Albireo. With Struve 3053 being such a nice star, I decided to learn how to star-hop to it using the instructions outlined in 'Turn Left at Orion' - "Start at the middle of the W and step northeast to the fourth-magnitude star, Kappa; one step farther brings you to a fifth-magnitude star, 10 Cassiopeiae. From there, look northward for three six-magnitude stars in a south line. The southernmost of these, slightly farther from the other two is Struve 3053." There is such enjoyment to be found in starhopping, and you can bet your bottom dollar that I'll be spending many a night leaping off from Gamma Cassiopeiae.

Up next was Mars. Having waited for almost an hour for it to clear the trees I was eager to sketch it. This is my first planetary sketch, so there was level of trepidation that had the adrenaline pumping. I spent approximately one hour and 10 minutes observing the planet. I observed the planet at 139X; 208X, 277X; and 416X. With countless switches I settled on 277X as it seemed to be the sweet-spot. My first impression was how dark Syrtis Major appeared relative to the other shaded markings such as Sinus Meridiani. Syrtis Major really did take the shape of a darkened triangle - very nice indeed!.

In addition, The South Polar Cap (SPC) was observed. It appeared smaller and fainter than previous viewing sessions, and I could see the North Polar Hood. I was keen to try out out my relatively cheap colour filters on the 'Red' planet. The best colours were red; orange, and blue. The red and orange filters helped to bring out some of the shaded features, and the blue filter helped with the SPC. However, I would feel that the planet is probably best observed without colour filters - wonder what others think.

To finish the night, I sat back and casually viewed the Moon at 50X. Each time I look at it at low power I'm always struck by its beauty.

Other details from Tuesday's session include:

Materials used: 2B pencil, an eraser, and a blending stump. The images were sketched at the eyepiece, cropped, colourised and resized using GIMP 2.1. 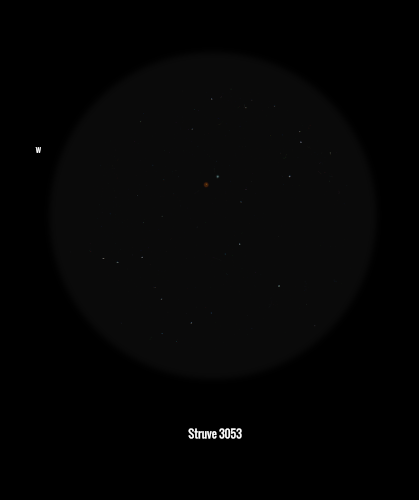 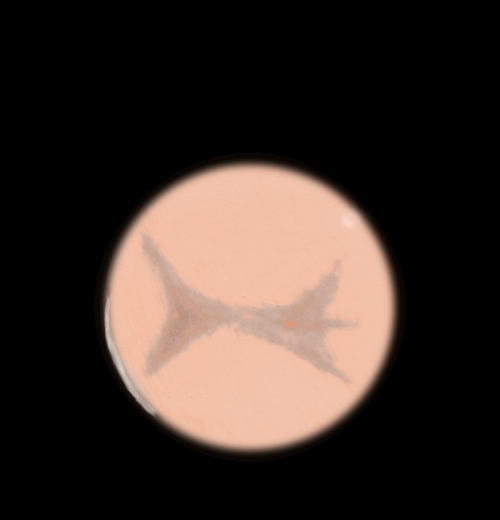 You are finally one up on me!
I have never observed STF 3053.
I can see why.
It's very near to the Cassiopeia - Cepheus border.
It's well away from the other parts of Cassiopeia which I have observed over the decades.
Sissy Haas and Robert Burnham have listed STF 3053 in both their books. And of course, it is listed on www.stelledoppie.it
Your sketch of this double is extremely good and it is encouraging me to go and find it.

I am sorry you had great difficulty in finding NGC 129. Maybe some other time you will see the 3 magnitude 9 stars which form an equilateral triangle.

And as for Mars: please note that you did observe Martian clouds for maybe the first time! Clouds are the very reason why we are seeing the North Polar Hood. Syrtis Major is everyone's dream feature to see on Mars going back through the centuries when Christian Huygens first saw it in the 1672. Therefore you are in serious prestigious company, Darren!

I see we are going to have more clear skies on Friday night.
Therefore I will be seeking out another carbon star in Cassiopeia.

Thankfully, that mistake led me to Struve 3053, so silver linings and all that -well, orange and blue ones when I think of it! I wonder what you will make of it when you see it. I'm sure with your fine scope your description of its colours will be great.

And would you believe that I only realised that the finder was out when I went to observe Mars? And on Mars, it seems like so many of us are enjoying it as of late. I am thinking of popping out for a bit again tonight to have a peek - it is so hard to resist having a look at it when the sky is so nice.

I hope you are having a great time out there, and have bagged that Carbon star.

Maybe I'm missing something here.
But I did successfully observe and split ES 38 on Tuesday night.
ES 38 is the optical double star.
But MSB 75 is the carbon star which is the secondary and I did observe it.
If you wish to re-read my original report again, please feel free to do so.
Thank you very much.

I hope all is well. When I said I hope you've managed to bag that Carbon star I was referring to the one you were hoping to observe last night... "Therefore I will be seeking out another carbon star in Cassiopeia."