Some of you might recall that I failed to sketch the Moon during August. Meaning, I'd need to sketch the Moon twice in a month to have completed 12 Lunar sketches by the end of December. So, with tonight providing some decent skies I decided to go for number 11. Slim pickings tonight though as the Moon is at 99.7% illumination. In saying that, three craters did catch my eye pretty much straight away.

First up was la Perouse. It was very close to the terminator, and had several interesting features to the North. From my observation, this crater seemed to have a some sort of rocky feature on its central floor that was slightly closer to its eastern wall.

Next up were Kapteyn, and Barkla. Unlike la Perouse, Kapleyn's floor appeared rather smooth, and its walls were fairly well defined. For me Barkla was the most interesting of the three craters though as there is a very pretty crater in close proximity to it; Rukl names it Langrenus M.

Other details from tonight's session include:

Location: Dundrum - Bortle 8
Instrument: f/5 250mm Newtonian Reflector on a Dobsonian base
Seeing: 4pk
Transparency: 3 (Moon was directly over a neighbour's house, and another neighbour had their heater blowing hot air into the atmosphere)
Time: 20:36 - 21:11 UT

Clear skies to all,
Darren. 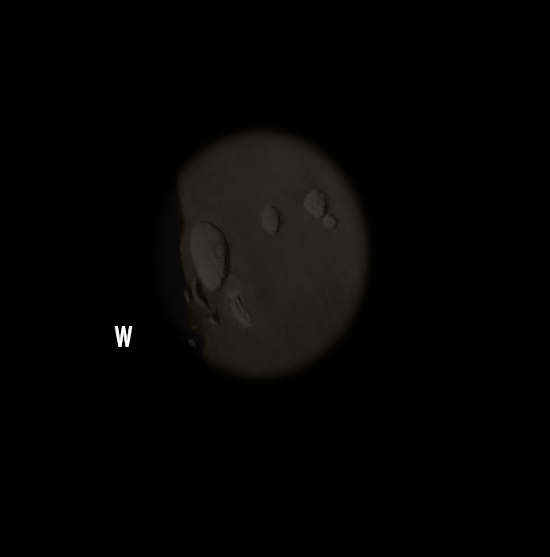 I just have enough time to say that you have achieved a stunning new sketch here.

These 3 craters I have observed in 2020 and they are all goodies!

And thank you for including Langrenus M too.

Map 49 in Rukl's Atlas of the Moon is packed with so many craters. I have observed 16 of them including Dorsa Andrusov which is in Mare Fecunditatis - the Sea of Fertility.

Also many congratulations on Sketch number 11.
You ought to make it to number 12 before 2020 is over.

We may have clear skies tomorrow night Wednesday.

Very many thanks for your kind words. Delighted to read you observed these craters this year. Apparently, when we view them from Earth they take an oblong form, but they're more circular on the Moon. I read that it has to do with where they are located on Moon.

Congratulations on observing 16 craters from Map 49...thats something else!

I'd love some more clear skies to observe Mars before it recedes even further.