I hope all is well with you and those close to you.

We had pretty decent skies over south Dublin last night, so I went to make the most of them. Beginning at 17:21 UT I was outside with my wife, daughter, and son to watch the ISS fly over Ireland. It was the first time that my wife and kids saw it so that was something special. While we were out we also had a look at Jupiter and Saturn, which are getting closer and closer each evening, and Mars.

And speaking of Mars, I decided to observe and sketch it again. I started the sketch at 22:05, and finished up just before 22:40 UT. There were very few opportunities to get a sharp image of the planet as the seeing was poor. I really could not go beyond 208X. I also used a Red filter to help bring out some of the markings.

Thanks to Stevie and Aubrey's suggestions I used the 'Mars Mapper' and 'Mars Profiler' applications to identify the markings on the Planet. The South Polar Cap (SPC) was visible, although it was very small and feint. The North Polar Hood (NPH) was also visible, and was quite extensive.

It would be great to get a couple more viewings of Mars before the end of the year because I am very much enjoying spending time with the Planet.

Materials used 2B pencil, eraser, an eraser shield, A4 170gsm sketching pad paper. The image was scanned into GIMP where it was colourized, and resized.

Very many thanks for taking the time to read the above post, and as always your comments and feedback are very much welcomed. 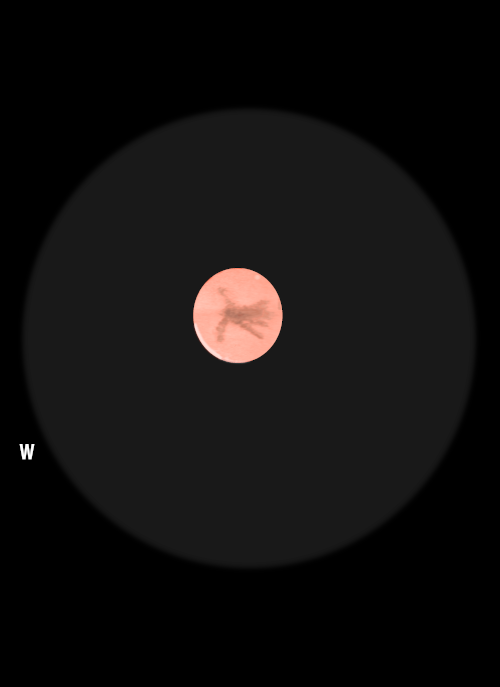 What a very beautiful sketch you have given us all here!
I hugely admire your colour of Mars.
It's seriously authentic.
And you have named 5 features which are in your sketch.

Very many thanks for your nice comments. The colour was helped by using the red filter. And speaking of filters, have you ever used an ND filter? It was suggested that it might help with viewing Mars - love to hear your thoughts on it.

Chat soon, and I'll probably see you tomorrow night over zoom. Until then, I'm off to buy some mince pies

I do have my mince pies bought for Friday night for the Stars, comets and mince pies I am looking forward to the IAS meeting via Zoom.
See you then, pal!

Less More
1 month 2 weeks ago #109766 by lunartic
Replied by lunartic on topic Mars 08 December 2020
Darren
There are colour filters that bring out different features on Mars.  Red, orange and yellow work well.
Here's a link.
www.dhinds.co.uk/blogs/news/baader-colou...mars-2020-opposition
Paul
Programming today is a race between software engineers striving to build bigger and better programs, and the universe trying to produce bigger and better idiots. So far, the universe is winning.