I thought I was seeing things earlier...the odd bright point in the sky here, a colourful one there, and then I realised that we had clear skies of South Dublin!

Needless to say, there was an excitement in me that I had not felt in quite a while. Normally it can be a bit of an effort to move the 10" scope out to the back garden, but not tonight!

Base and scope moved in one go. Then straight back in for the eyepieces, sketching pad, pencils, head torch, and seat. Following that, it was layer upon layer: Hoodie up, hat over hoodie, socks over trousers, and winter gloves on. I was ready to go by 19:55UT. And who was the first to welcome me back? Only Orion - the hunter.

Using the 10 X 50 finder scope I went looking for Messier 42. Within seconds I was staring in wonder at the trapezium and the nebula surrounding those stars. So, I decided to sketch it at 50X.

Attached to the eyepiece was a UHC-S (L-Booster) Filter; it made a big difference. For example, the darker elements of the nebula were easily identified, and nebuloisty surrounding Messier 43 was seen clearly. I was even able to use averted vision to reveal some of the nebula that spreads out from the trapezium. So, thanks again Mike - that filter is an amazing piece of kit to have in the bag.

East of the Trapezium ,Theta-2 looked striking, and there were a few lower magnitude stars in my FOV too.

By 20:30Ut I had finished the sketch, so I decided to have a look through Gemini, but the clouds had a different idea. Not all was lost though...Ursa Major was available. Alcor and Mizar were observed at 50X. I know that Mizar's Star B is said to be white in colour, but I thought there was a slight blue hue to it tonight - am I going mad? And what about Alcor and Mizar's little friend with the big name: Sidus Ludovicianum. Apparently it was once considered a new planet! Today, that eight-magnitude star helps form a nice little triangular-shaped asterism that's only gorgeous to look at.

So, that's my lot for tonight. While the sketch is far from perfect, I hope you enjoy it. As always comments and feedback are welcomed.

Cleat skies to all, 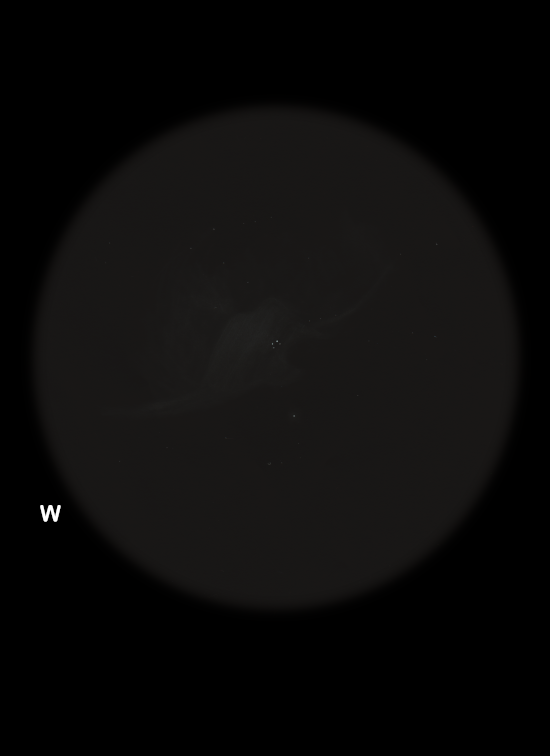 Less More
2 weeks 6 days ago - 2 weeks 6 days ago #109960 by lunartic
Replied by lunartic on topic After a very long wait it was nice to be under the stars again
It was good to be out again, I was not setting up the scope, the wind was ferocious so I took out the 10x50s and did a quick jaunt around the sky.  The seeing was not the best and it was difficult to find a spot out of the wind and not be buffeted about.  Still, it was good to see the stars again.

Nice sketch, it reminds me of a sketch I did some years back, when I sketched I saw those extensions, like wings, and I thought I was seeing something that wasn't there. 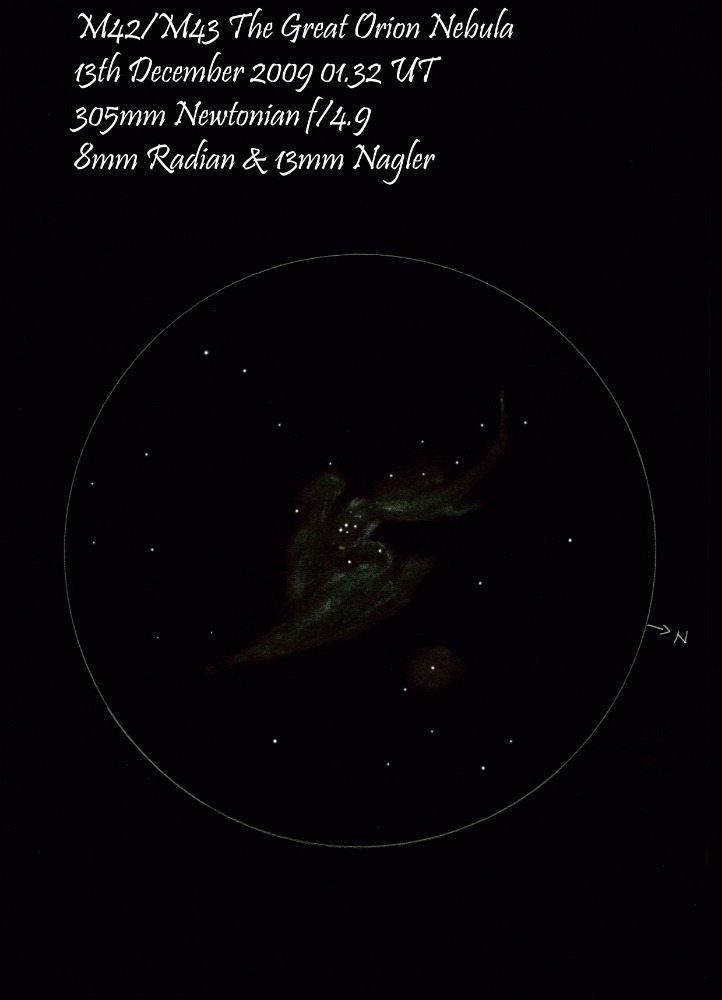 That's a mighty fine sketch. I love the colours in it, and your detail in the nebula is fantastic.

Yep, the wind was up last night alright. Thankfully where I have my scope set up it's nicely sheltered from wind.

Let's hope we won't have to wait too long for another clear night.

Less More
2 weeks 5 days ago #109962 by flt158
Replied by flt158 on topic After a very long wait it was nice to be under the stars again
Hello, everyone.
I was very glad some of you got out under the stars on Wednesday night - albeit in windy conditions.
I could see it was going to be a reasonably clear night as sunset was about to occur.
I wasn't free to set up my own scope. I had some fellowship via Zoom with folk I do know very well.
However I will do some observing once these howling gales die down.

These sketches of M42 & M43 by Darren and Paul are truly magical. Thank you for providing them here.
From my back garden I have extremely fond memories of seeing the E & F stars along with the Trapezium from a few years back at a mere 112X. The seeing conditions at the time must have been highly transparent.

And it is okay to see a bit of blue in Mizar B. Even though I don't remember seeing the same effect. But you are definitely not going mad!
Over on Cloudy Nights many observers see all sorts of colours on many different double stars. There is a star expert whose name is Jim Kaler who states Mizar A has a spectral class of A2. While Mizar B is A7. Therefore it's getting near a B class star which might mean it might have a slightly blue tint to it. www.stelledoppie.it does not give us any further indication.

Very many thanks for your message. That wind is something else alright.

Also, thank you for clarifying that there could be a slightly blue hue to Mizar's 'B' star.

Looking forward to reading your next report.

Chat soon and clear skies to you,