I wonder if you can help me figure something out please? This is an image of Saturn taken on the night of 10th August, about 11:50 pm, it was very low on the horizon.

According to a web app on Sky & Telescopes website, the moons are (from left to right) Dione, Tethys, Rhea (barely visible upper right) and Titan on the far right of the image.

My question is relating to Dione, it is appearing in all of my images as 2 moons, the left most with a colour cast. As you can see, the rest of the moons are sharp and in focus, so I don't think there was an imaging issue or that it is atmospheric dispersion or it would affect all parts of the image equally.

I was going to use a clone stamp and remove the moon entirely from the image, but it is valid data in the sense it exist. Has anyone any ideas what this is?


Many thanks and clear skies!

p.s Imaging equipment is as follows;

Software:
Firecapture
Astrostakkert for stacking
Registax 6 for waveletts processing
Pixinsight for histogram, levels & hue (I know this will be controversial, but I don't have photoshop!) 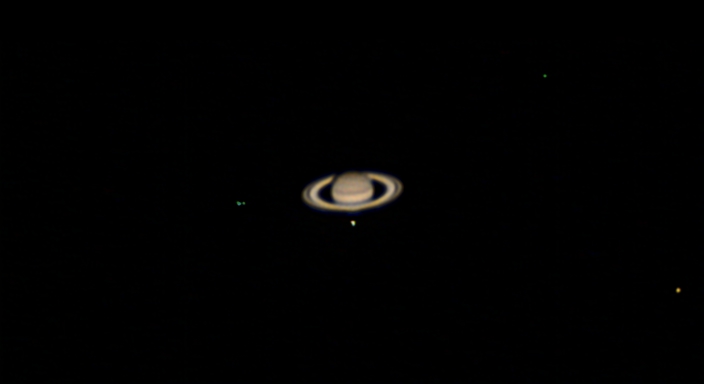 Less More
4 months 3 weeks ago #109384 by Fermidox
Replied by Fermidox on topic Saturn image question
Stellarium gives the same satellite geometry and there is a mag 14 star close by to the north of Dione, but that seems unlikely to have been picked up. There does seem to be some distortion in that Rhea and of course Titan should be brighter than Tethys but it doesn't look that way on the pic. So I'd guess it's some sort of atmospheric effect but I'll have to pass it on to the imaging experts!

Many thanks for your response, I think you maybe on to something.  You used the word distortion and it got me thinking, I might know what the problem is.  Before I took these images, I checked the collimation of the scope and there was a slight "mouse bite" out of the image, but when I focused the image, everything looked fine.  I didn't give it anymore thought afterward.

But your message got me thinking and I remembered the collimation issue.  Last year I built an observatory in the back garden (Roll Off Roof), going over my build notes from the time, I deliberately set the height of the walls to obscure the first 13 degrees of sky to block out neighbours lights.

The images were taken when Saturn was setting at about 14 degrees...the first point in my local sky where I have a small but clear line of sight.  I probably have diffraction effects from the observatory wall as Saturn is setting.

In hindsight, as Saturn was setting, that mouse bite in the image would have got worse.  I guess I will have to wait a few years for Saturn to rise in the sky again before I get some decent images!  Oh well, back to Deep Sky imaging I suppose


Thanks again for taking the time to answer my post!

Less More
4 months 3 weeks ago #109386 by Skygazer2013
Replied by Skygazer2013 on topic Saturn image question
Sorry, one last comment on the brightness of Titan.  That was my fault in post processing.  In the raw data the moons are not visible because of the difference in brightness.  I was so fixated on figuring out the distortion on Dione that I was not paying attention to masking and the levels for each of the moons.

Thanks again and clear skies!

Less More
4 months 3 weeks ago #109388 by Fermidox
Replied by Fermidox on topic Saturn image question
Yep I think if the target was only 1 degree above the local 'horizon' then that's your answer.
The following user(s) said Thank You: Until_then-Goodnight!